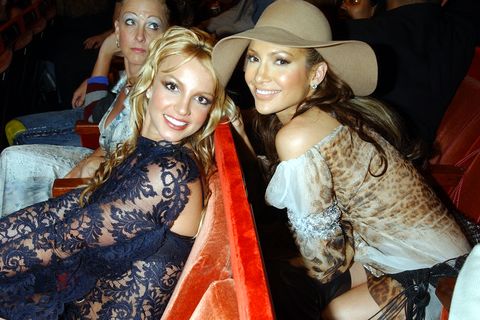 Britney Spears has been weathering attacks on her parenting from her ex, Kevin Federline, with whom she shares two sons, Sean Preston and Jayden James. Her old friend, Jennifer Lopez, sent a message of support to Spears on Instagram Stories after Spears quoted the Marry Me actress.

“Stay [strong],” Lopez wrote, re-sharing a post that has since been deleted in which Spears mentioned her, and it included a photo of them both at the 2001 MTV Video Music Awards.

“In a world where you have the right to use your feet … heart … mouth … eyes … and body… to express yourself however you may !!!” Spears wrote. “Declaration of INDEPENDENCE … for equality and to be equal !!! Not even touching, covering, and holding me against my will for 4 months !!!.”

“As Jennifer Lopez once said,” she went on, “’You look right down that camera and tell every little girl in the world to get loud and never ever back down to giving light to injustice ‘ !!! I’m here to share that freedom is a state of mind !!! GOD BLESS U ALL Psss I shot this today !!!”

Lopez commented on the original post with three heart emojis.

Spears and Federline’s sons have not been seeing their mother much, and in an interview with ITV, the former dancer claimed that the kids decided on their own to not see her or attend her wedding to Sam Asghari. Federline then shared private clips of the kids with Spears which he eventually deleted. Spears’ attorney called this a “violation” of the family’s privacy, especially because the kids were only 11 and 12 in the clips.

“Whether he realizes it or not, Mr. Federline has not only violated the privacy and dignity of the mother of his children, he has undermined his own children, whose privacy he should protect,” lawyer Mathew Rosengart told Page Six.

Aimée Lutkin is the weekend editor at ELLE.com. Her writing has appeared in Jezebel, Glamour, Marie Claire and more. Her first book, The Lonely Hunter, will be released by Dial Press in February 2022.