It should have taken a hero of enormous stature to stand up and outshine the Avengers, but Tom Holland did it with little more than superheroic likability. Okay, that and a Spider-Man suit. The British actor is still a relative newcomer in Hollywood but has the poise and profile of someone who’s been doing it for years.

Of course, it helps that he looks every inch the matinee movie star, with a wardrobe to match. Holland’s style brings together contemporary items with a classic leading man vibe. Think an updated take on the old school Hollywood star, pairing flawless tailoring with casual menswear staples.

If you ever wanted proof that a white T-shirt belongs beneath a formal jacket as much as it does a hoodie, then Holland is your friendly neighbourhood style icon. There’s also a manly edge to his off-duty style, with masculine classics and tonal looks that sit between the slickly-styled machismo of the 1950s and 21st-century streetwear.

If your style sense is tingling, get some wardrobe inspiration from his best looks below.

Proving that he’s the undisputed hero of replacing a formal shirt with a simple tee, this is Holland playing to his strengths. He’s got a seemingly endless rack of exquisite tailoring – all slim through the body and perfectly fitted – perhaps cropped at the ankle.

There’s also something of the 1950s rock ‘n’ roll era with this get-up – the cut and lapels call back to the days of hip-swivelling sex icons and his hair is swept back almost into a pompadour. While he’s a dab hand at updating the formal look with some youthful pizazz, Holland does the classics too. And classic is absolutely the word here, as Holland puts a 21st-century spin on the matinee-era star with this broad double-breasted jacket, calling back to 1930s Hollywood.

It’s slim cut through the body – another example of Holland’s keen eye (not to mention body size) for swish tailoring – to create a refined, elegant look. Though again, you’ll note that there’s not a shirt or tie to be seen. Clark Kent take note. Continuing his knack for squeezing every last drop of modern style from retro-inspired items, here’s a look that’s pure vintage.

There’s a ’70s feel to the striped shirt (with open collar for extra street cred), a ’60s Easy Rider-looking suede jacket with a contemporary cut, and a touch of the ’50s thrown in with Holland’s pushed back side-parting. It’s an outfit that spans at least three decades, but the overall feel is timeless. Pushing Back The Years

Another of Holland’s more manly looks, this invokes the spirit of movie stars from eras past – including stylish alphas such as Cary Grant, Robert De Niro – mostly thanks to a tonal outfit that rolls back the decades.

There’s a throwback ’50s feel to the striped, open-collar shirt and the combination of dark green and burgundy (seen for the second time on this list) shows that he can take on boss-level colour combos and win. 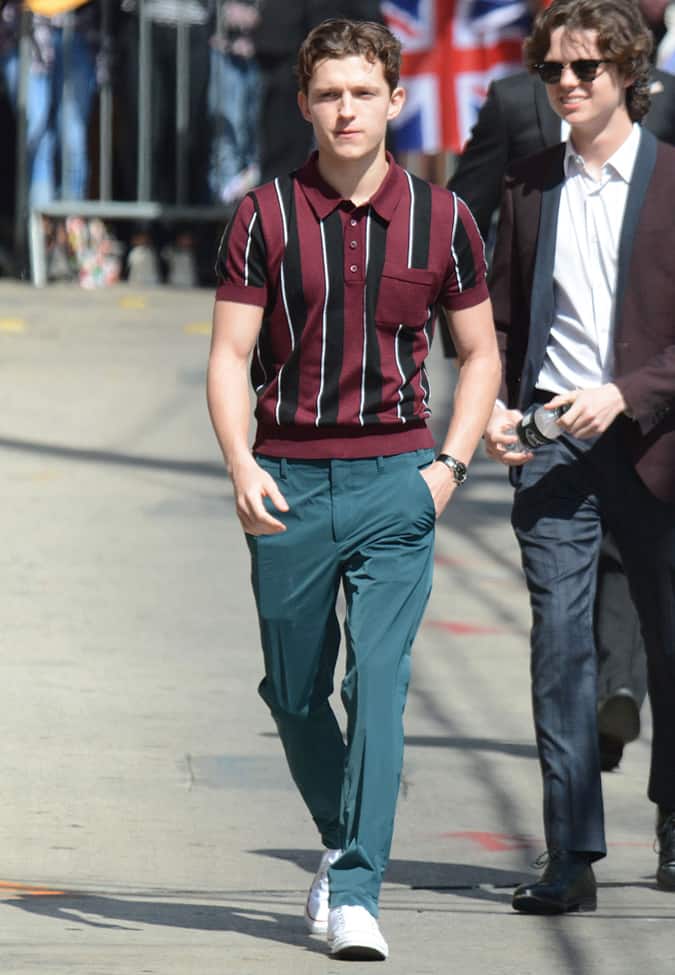 This dapper combo shows off Tom Holland’s love of autumnal colours and it’s almost his sense of style in one look – slick tailoring with plaid trousers, a plain T-shirt to dial down the formality, and an air of classic Hollywood leading man brought into the modern day with the interesting colour palette.

Brogues without socks are a risk but work thanks to the cut of trousers and well-matched colours. 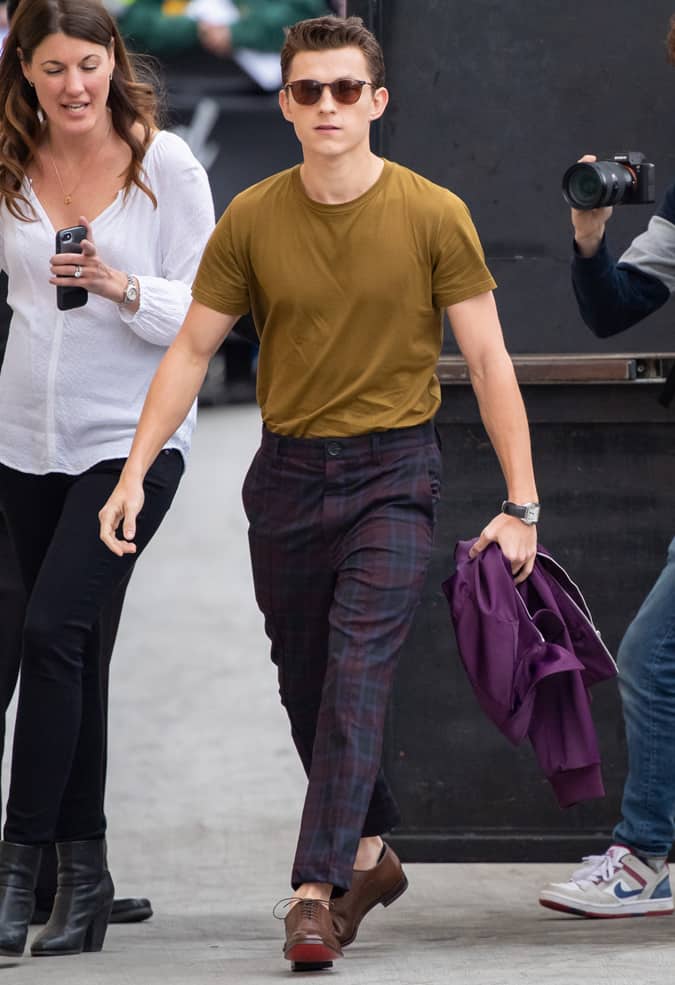 Holland’s back in his favoured burgundy for this look, which is yet another play on the classic Hollywood superstar (like an all-in-one superhero suit but, well, incredibly tailored).

Holland dials down the formality with his go-to plain tee beneath the jacket, but the real spangle here is the flawless tailoring of the unconventional jacket. With its standout lapels and almost sports-like fit, it’s a good example of someone dressing for their height – the slim, tonal styling making him look taller. Bringing something new or unique to the red carpet is a risk: death or glory, in style terms. In this case, Holland nails it. Instead of going all out on colours, he plays with formality thanks to the unusually long jacket.

It’s still a classic example of Holland’s ability to wear good tailoring and works as an elongated upgrade on the standard suit jacket, fitting something like a tailored raincoat. Beneath the jacket, Holland shows off one of the first rules of easy men’s style: if in doubt, pare down with neutral colours and unfussy combos. Every superhero needs a secret identity and here Holland trades in the tailoring for a more laid-back outfit – darker and more rugged without necessarily going fully casual.

As before, there’s a touch of ’50s styling about him, channeling the super-cool spectre of James Dean with Converse, dark jeans, and trucker-style jacket. Like classic tailoring, it’s a look that hasn’t gone out of style in 70 years. 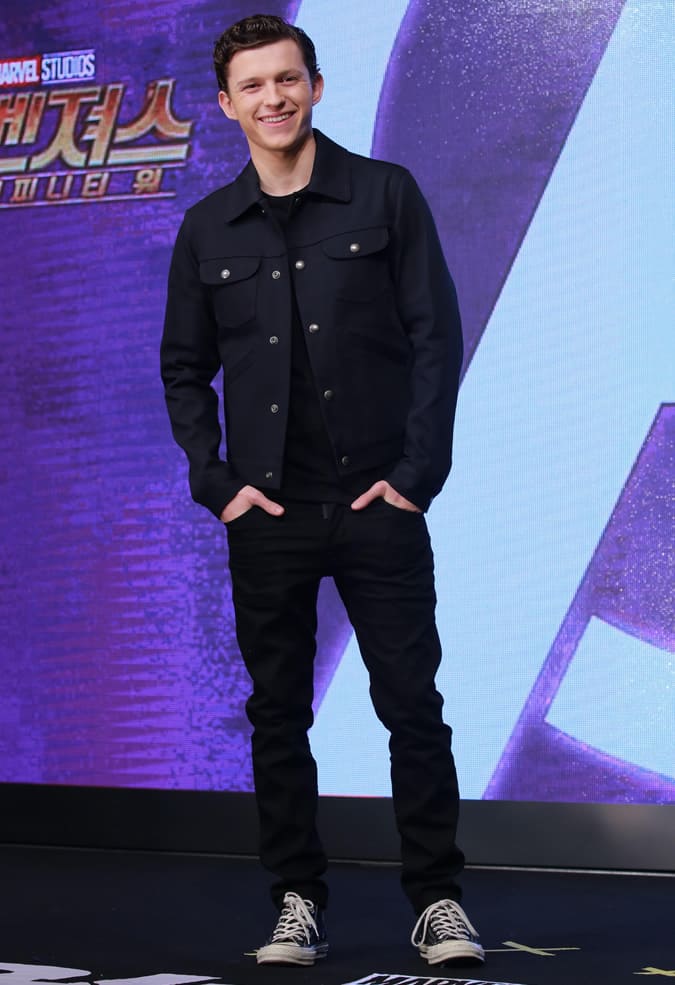 As a lover of classic menswear, Holland must love a black tie invitation, because it means he can pull out showstopping dinner jackets like this one.

He opts again for a broad double-breasted option cut slim through the torso – with those eye-catching, oversized buttons making sure he stands out – and keeps it formal by ditching his usual tee for a pristine white shirt. This is one suit that even billionaire playboy Bruce Wayne would envy. Taking a leaf out of the book of everyone’s other favourite style hero, James Bond, this suit wouldn’t look amiss on Daniel Craig. Though Holland would be the first to admit that he doesn’t quite have that kind of beef, so relies on a cutaway collar and windowpane check to broaden the torso.

He keeps it simple with a two-tone blue combo – a tonal match that never fails with formalwear – and adds a three-colour striped tie and shake and stir the formality.